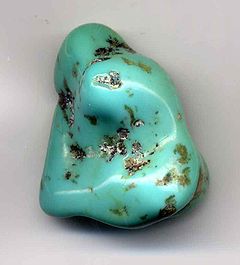 To the Ancient Egyptians, turquoise stone meaning was powerful protection. It was associated with Hathor, the goddess of motherhood, dance, and music. Turquoise was often found in tombs and burial objects, presumably to protect the deceased on his journey to the afterlife. For example, the burial mask of King Tutankhamun features intricate turquoise inlay because of this turquoise stone meaning.

Turquoise gemstones mined in Persia and the surrounding area are more blue than those found in other areas of the world. Persians viewed turquoise as symbolic of the connection between heaven and earth. For this reason, the roofs of many palaces and mosques were covered in turquoise stone. Turquoise gemstone jewelry and adornments was used to protect the wearer. Turquoise set into a turban was believed to protect the wearer from evil influence. Many soldiers and warriors decorated their weapons and their horses’ bridles with turquoise to ward off death and protect them in battle. Part of the turquoise stone meaning was the belief that turquoise jewelry would change color when the wearer was in danger, so many people wore turquoise jewelry regularly to protect themselves from evil. (Turquoise really can change color, but it is generally due to exposure to light, dust, or cosmetics.)

The southwestern United States has large deposits of turquoise stone and it was originally used for trade by tribes like the Apache and Aztec. However, the gemstone quickly developed a deeper turquoise stone significance, as well. To the Aztecs, the stone had healing properties that could cure sickness. Turquoise was commonly used in objects that the Aztecs sacrificed to their gods, as a way of requesting good health. It was also believed that turquoise could bring strength, prosperity, and success in battle. Similarly, Apache Indians believed in the turquoise stone meaning that it could give their archers perfect aim in battle. Many Native American tribes in the area believed that turquoise would help the wearer control his negative emotions.

Turquoise is the modern birthstone for December. It is believed to protect against disease, strengthen communication, and promote healing in the wearer.

Turquoise is one of the most powerful stones in the world and the properties of turquoise have many [...]

In many cultures throughout history and in the modern practice of crystal healing, turquoise is one[...]

Turquoise gemstone meaning and significance varies from culture to culture. Each society or group of[...]

Though there are many different kinds of gemstones, turquoise is one of the most beautiful and most [...]